Known for: Tom Bacon was an engineer who played a little-known but crucial role in the 1969 Apollo 11 mission to land on the moon. He spent thirty-five years developing the hydrogen-oxygen fuel cell, an electrochemical device which converts the energy created by a chemical reaction into electricity. NASA extended his idea to provide the power source for Apollo 11, and Bacon’s fuel cells worked flawlessly to provide heating, lighting and communications power for the three astronauts, Neil Armstrong, Buzz Aldrin and Michael Collins, with water as the only by-product. Bacon’s role was so crucial that, on meeting him, President Nixon said, “Tom, without you we wouldn’t have gotten to the moon.”[1]

School days: Bacon was at Eton from 1918 to 1922. He was in A.M. Goodhart’s house, as were his two brothers, Anthony and Christopher, an engineer and a chemist respectively. He showed an aptitude for science at school, and won the Moseley Physics Prize in his last year. He went on to study at Trinity College, Cambridge. During his career, he was well-known for continually wearing his Old Etonian Association tie!

Life and career: After Eton, Tom studied mechanical sciences at Trinity College, Cambridge. It was at his first job, working for engineering firm C.A. Parsons in Newcastle, that he came across the theory of using hydrogen and oxygen to power an internal combustion engine. When war broke out in 1939, Tom joined the Admiralty to work on anti-submarine research in Scotland. In 1946, he moved to Cambridge and once more picked up his research into fuel cells whilst working at the university in the Department of Chemical Engineering.

In 1955, Tom moved to Marshall of Cambridge and secured funding from the National Research Development Council (NRDC) to develop an efficient and automatic fuel cell. Despite Bacon’s success – he showcased his device to British industry experts in 1959 – no commercial interest was shown until patents were taken out by an American company, Pratt and Whitney; they had won the contract with NASA to develop a power source for the Apollo programme. After a one-hundred million dollar development programme, with a team of 1,000, three power plants were able to provide 400 kilo watt hours of electrical energy to the space shuttle.

Today, versions of the fuel cells are used in electric cars and as portable power units for soldiers. Tom received an OBE in 1967, and was made a Fellow of the Royal Society in 1973. In 1991, he was awarded the first Grove Medal, an award given for significant contribution to the development and success of fuel cell technology. 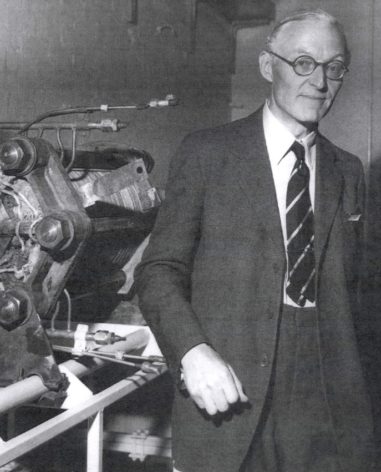 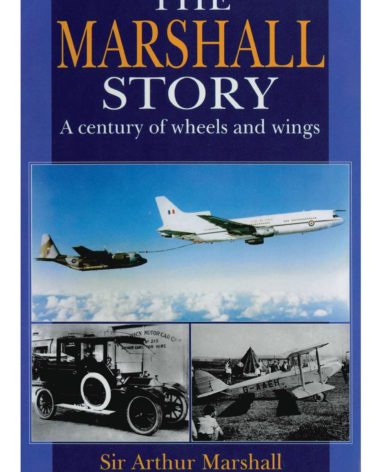 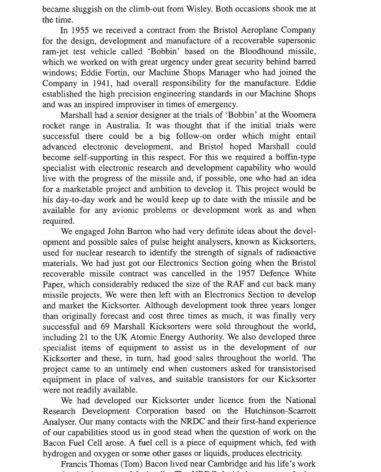 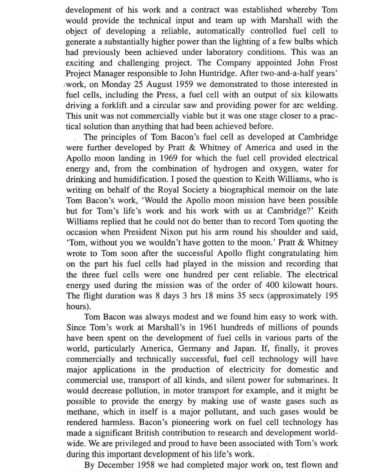