School days: Blofeld was at Eton 1952-1957. He was Captain of the Eleven in his final year, positioned as wicket-keeper.

Blofeld’s career as a cricketer continued after leaving Eton for Cambridge, playing in the Varsity Match against Oxford in 1959. He ‘drifted’ into sports journalism in the 1960s, writing for various newspapers until he joined the Test Match Special team of cricket commentators on BBC Radio 4 in 1972. He was nicknamed ‘Blowers’ by his colleague Brian Johnston, and his commentary was characterised by his plummy voice and a tendency to note superfluous details, such as pigeons flying over the pitch, the movement of cranes on the horizon, and the flight of passing helicopters and planes. His phrase ‘my dear old thing’ was also a much-loved aspect of his presence in the commentary box. Blofeld retired from cricket commentary in 2017, but continues to appear on the radio, and in his own touring live chat show An Evening with Blowers. 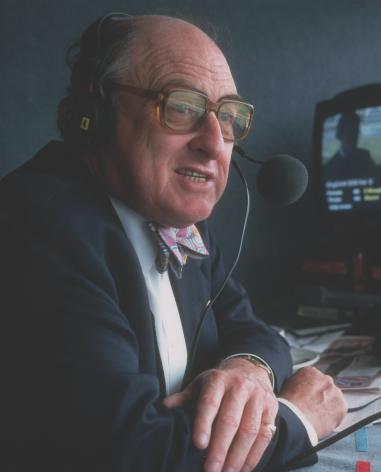