Known for: A British soldier and war poet. Grenfell is best remembered for his war poem, Into Battle, which expresses his connection with the natural world, where the soldier can find fulfilment in battle. The birds and trees and even the army horses around him are all represented as teaching the soldier how to live and at the same time prepare for death.

School days: Julian Henry Francis Grenfell was born in London. His parents, William and Ethel, were members of an artistic and intellectual high-society group, known as “the souls.” Grenfell was educated at Eton College in 1901-1905, where his achievements were sporting and literary rather than academic. He had not been entered for a scholarship to the school, and later failed to gain one to Balliol College. He, nevertheless, won the Jelf prize for Latin verse and wrote for and edited college magazines. He became one of the editors of the Eton Chronicle, and he contributed to another magazine, ephemeral but popular, The Outsider.

At Balliol College, Oxford, (1906-1910) Grenfell was renowned for his athletic and sporting skills, but his greatest passion was hunting. In his early poems, such as To a Black Greyhound, he depicts his love of these activities. He was also surrounded by a brilliant company of friends, mainly old Etonians. Some of these saw a gentle, and in some ways a very humble person. In fact, there was a deeply sensitive side to his character, evident in his reaction to frequent disputes with his mother. Ettie Grenfell was a woman of great social distinction who wanted to introduce Grenfell to this life. However, distasted social gatherings and parties Grenfell was constantly in conflict with his mother, and as a result he wrote a rebellious poem I Won’t be Made a Social Pet and a series of unpublished essays in order to criticise the high society. Overwork, illness, disappointment in his romantic affairs, and rejection of his ideas, led to a breakdown, with the result that he received only a pass degree from Balliol.

After Oxford in 1910, he joined the Royal Dragoons, a heavy cavalry regiment of the British army. He was sent to India at the end of 1910, and to South Africa the following year, where he continued to write poems, comical plays for his men to perform, and articles for the regimental magazine. By the summer of 1914, he was on the point of leaving the army. However, war was declared on 4th August and by early October, Grenfell was in France. He loved the outdoor life, the companionship of horses, dogs and men and the opportunity to fight for a noble cause. He was rewarded a Distinguished Service Order and refused a staff position in order to continue fighting.

On 13th May 1915, Grenfell was wounded while monitoring enemy troop movements. He died on 26th May and was buried in the military cemetery in Boulogne, France. Into Battle was first published in The Times the day after his death. Whereas much of the poetry we associate with World War One conveys the horror and waste of war, Grenfell’s poem sees this war as an opportunity to experience a heightened form of existence in a glorious and noble struggle. 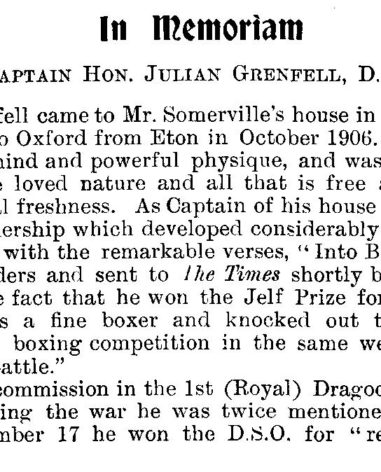 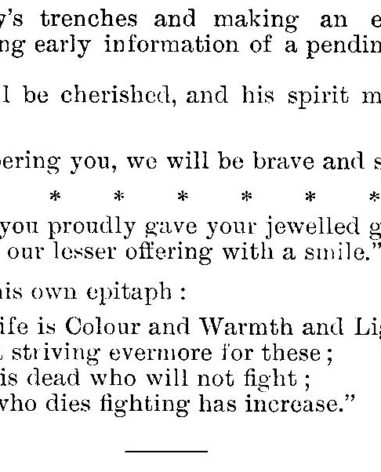