Known for: Ronald Arbuthnott Knox was a Roman Catholic priest and author of various detective stories. He was well known for his translation of the Bible, as well as coining together his own “Ten Commandments” for writing detective fiction. He is also well known for broadcasting a live report titled ‘Broadcasting the Barricades’, which detailed a revolution occurring in London which led to widespread panic amongst listeners.

School days: Knox attended Eton College between 1900 and 1906, leaving at age 18. Whilst at Eton, he was awarded a number of prizes in both Latin and Greek, such as the Assistant Master’s Latin Prose and Verse Prizes. He also had numerous pieces of work “sent up” in Latin and Greek, which was a rare honour for many boys. In 1906, Knox was an editor for the Eton College Chronicle as well as Captain of the School before he left. 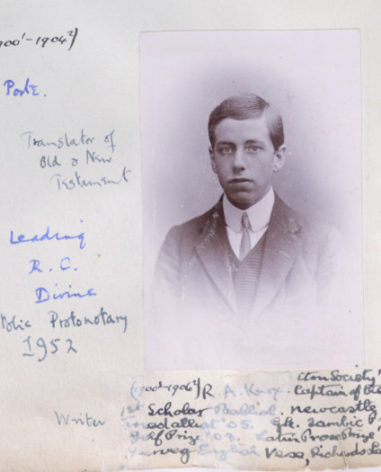