Eden was a Conservative politician who served 3 periods as Foreign Secretary and a brief term as Prime Minister. Best known for his controversial handling of the Suez Crisis.

School days: He was educated at Eton College from 1911-1915. Whilst at school won a Divinity prize, excelled at cricket, rugby and rowing and won the house colours for rowing. After leaving Eton he joined the 21st (Yeoman Rifles) Battalion serving as Captain and entered France in June 1916, serving on the Western Front. At the age of 21 he became the youngest Brigade major in the British army. He was awarded the Military Cross, Victory Medal and British war medal.

From 1919-1922 he studied Oriental Languages at Christ Church Oxford. He became a member of Parliament for Warwick and Leamington in 1923 and the same year married Beatrice Helen Beckett. (divorced 1950). He re-married Clarissa Churchill in 1952.

By 1935 he became Foreign Secretary but resigned 3 years later in protest at Neville Chamberlains appeasement policy towards Germany and Italy. He re-joined the Foreign Office and during Churchills premiership became foreign Secretary for the second time between 1940-1945 and again in 1951-1955.

As Foreign secretary he helped settle the Anglo-Iranian oil disputes, to resolve the quarrel between Italy and Yugoslavia over Trieste, to stop the Indo-China war and establish The South East Asian Treaty Organisation.

He eventually succeeded Churchill in 1955, his successes as Foreign secretary were overshadowed when he made a tactical mistake as Prime Minister. The British Government had been principal stakeholders in the Suez Canal since 1875, Colonel Abdul Nasser nationalised it in 1956. Fearing an Arab Alliance would cut off oil supplies to Europe he conspired with France and Israel in a badly performed invasion and with widespread condemnation from America, Soviet Union and the United nations he was forced into a humiliating retreat which resulted in his resignation in January 1957. 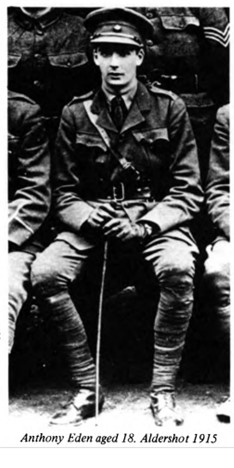