Known for: Naturalist, botanist and explorer, Banks advanced science through his discoveries, notably during his journey with Captain Cook aboard the Endeavour, and in his role as President of the Royal Society.

School days: Banks was at Eton from 1756 to 1759. Whilst at school he demonstrated a love for botany, exploring the surrounding countryside.

Life and career: upon receiving an inheritance from his father, Banks was able to pursue his interest in natural history and botany, travelling and collecting specimens, advancing the sciences. Accompanying Captain Cook aboard the HMB Endeavour from 1768 to 1771, Banks journeyed the world encountering plant species new to science. He became President of the Royal Society in 1768, remaining in this role until 1820, in which he was claimed to be an authoritarian figure.

The Eton College Natural History Museum has displays dedicated to this Old Etonian, including a replica of Banks’s cabin aboard the Endeavour, and prints from Banks’s Florilegium, a collection of engravings of plants collected during the 1768-71 voyage 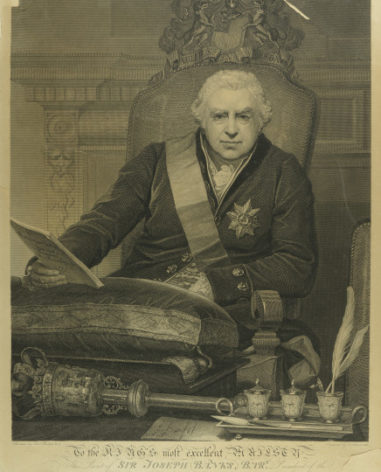