Malcolm’s love of history led him to begin a career in academia as a Fellow of Gonville and Caius College, Cambridge (1981). He then transitioned into journalism, becoming a political columnist (1987-1991) and foreign editor (1991-1992) for the Spectator as well as a political columnist for the Daily Telegraph (1992-1995).

Malcolm returned to his academic career in 1996, becoming a visiting fellow of St Antony’s College, Oxford. Malcolm is now a Senior Research Fellow at All Souls College, Oxford, a position which he has held since 2002. He describes his research interests in the following words:

“I have two main fields of interest in my current research: early modern intellectual history, with a special focus on the philosopher Thomas Hobbes (1588-1679); and relations between Western Europe and the Ottoman/Islamic world in the early modern period.”

School days: Malcolm was at Eton from 1969 to 1974. He was a King’s Scholar with a keen passion for acting, performing in plays such as ‘Androcles and the Lion’ and ‘Le Légataire Universel’. Malcolm was also – unsurprisingly, given his future career – a common contributor to the school magazine, the Chronicle, and wrote for both the ‘Societies’ and ‘Correspondence’ items. Malcolm went on to study History and English Literature at Peterhouse, Cambridge University. 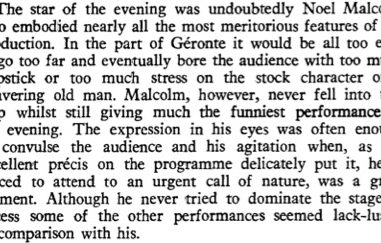 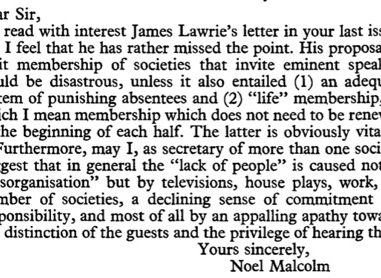