Known for: Composer and musician.

Arne was said to have shown a love at music whilst at Eton, annoying his fellow pupils by playing the recorder at all hours (ODNB). He entered the theatrical world of 18th-century London in the 1730s, and began composing music for operas, plays, masques, and oratorios.

In 1738 Arne was a founder member of the Society of Musicians (later the Royal Society of Musicians) with Handel, Boyce and Pepusch. The most famous of these compositions is the patriotic song ‘Rule, Britannia’, which was amongst the original songs composed for the masque Alfred.

His career was to some extent overshadowed by Handel, but ‘Rule, Britannia’ and his setting of ‘God Save our Noble King’ have led to his music being regularly performed, particularly at the annual Last Night of the Proms. 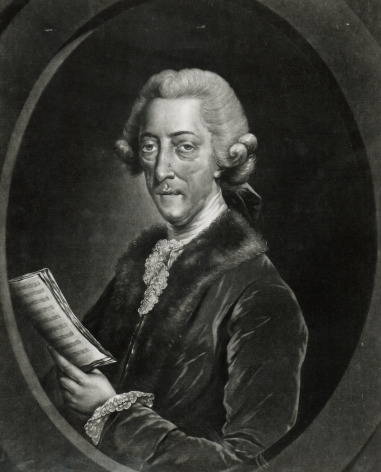