Known for: William Crimsworth is the male protagonist from Charlotte Brontë’s first novel, The Professor. Orphaned as a child, Crimsworth is sent to Eton by his uncles. As an adult, he travels to Belgium where he teaches at a boarding school and meets a young teacher, Frances Henri, whom he eventually marries. Though written before Jane Eyre, The Professor was rejected by publishers, and wasn’t published until after Charlotte died in 1855. The novel is partly autobiographical, as it is based on Brontë’s own experiences as a teacher in Brussels, and is also a precursor to her later novel, Villette.

School days: The novel opens with a letter written by William to an old Eton friend:

“I think when you and I were at Eton together, we were neither of us what could be called popular characters…What animal magnetism drew thee and me together I know not.”

Eton is mentioned several times throughout the course of the novel, and there is always a clear sense of the school having formed William’s character. In Chapter 21, William saves one of his students from drowning. His preparedness for this act of heroism is clearly drawn from his school days:

“My coat and waistcoat were off in an instant; I had not been brought up at Eton and bathed and swam there for ten years for nothing; it was a natural and easy act for me to leap to the rescue.”

At the end of the novel, now happily married, William is preparing to send his own son to Eton, claiming that the experience “will stir and reward him”.

William Crimsworth is sent to Eton by his uncles, who take him in after his mother dies in childbirth only six months after the death of his father. When his uncles attempt to steer him towards a life as a clergyman, Crimsworth refuses this path and takes a job as a teacher at a boarding school in Belgium. It is here that he meets Frances Henri, a young teacher with whom he has language lessons. Over time, he falls in love with Frances. After an attempt is made to separate them by his jealous employer, Mademoiselle Reuter, they marry and open a school of their own.

“Three – nay, four – pictures line the four-walled cell where are stored for me the records of the past. First, Eton. All in that picture is in far perspective, receding, diminutive, but freshly coloured, green, dewy, with a spring sky, piled with glittering yet showery clouds; for my childhood was not all sunshine – it had its overcast, its cold, its stormy hours.”

“Victor learns fast. He must soon go to Eton, where, I suspect, his first year or two will be utter wretchedness. To leave me, his mother, and his home, will give his heart an agonised wrench. Then, the fagging will not suit him; but emulation, thirst after knowledge, the glory of success, will stir and reward him in time.” 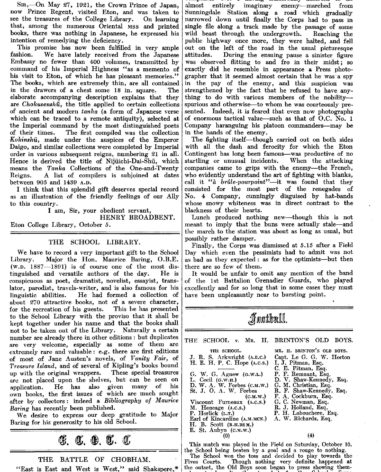